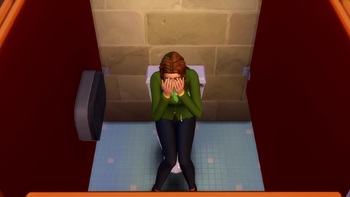 In public, when someone is Running Away to Cry for whatever reason, a restroom stall (or just the public restroom in general) seems like the most private place where they can easily shed their tears without being at risk of being noticed and judged for crying all willy-nilly. Bonus points if they use the toilet paper to clean their face off.

May occur as a result of Bathroom Stall of Overheard Insults. If someone is looking for them, they may end up Searching the Stalls. Can occur while Eating Lunch Alone. Sister Trope of Shower of Angst.