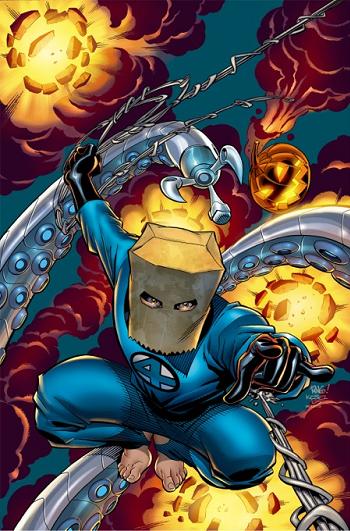 The "Bombastic Bag-Man" shows you how it's done.note  Oh, and yeah, that's the Fantastic Four outfit. See "Comic Books" below for details.
"With a saviour clad in a paper bag
that must be one ugly child"
— Dan Bull and The Stupendium on Momo, "Tune Into The Madness"
Advertisement:

Sometimes related to Paper-Thin Disguise, a plain paper grocery bag is often found to be a simple, yet effective way of concealing one's identity. In many cases, this usually involves a simple bag with a couple of eyeholes cut out, but variations exist. This usually does not occur when a person is planning a disguise, but rather, when a simple one is quickly needed.

This also seems to be commonly used as a mark of shame, whenever something embarrassing or humiliating has occurred, or for characters supposed to be unspeakably ugly. People will usually be able to recognize characters by voice, but it makes things painfully clear that something humiliating has happened.

Ralph starts wearing a paper bag mask after he is humiliated on the "Bloopers and Blunders" television show.

Ralph starts wearing a paper bag mask after he is humiliated on the "Bloopers and Blunders" television show.