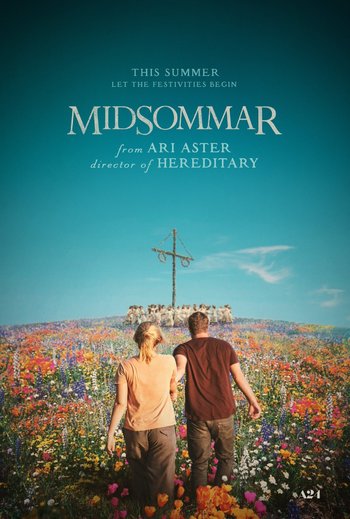 "We only do this every 90 years."
"Welcome to Hårga, and happy midsummer! It has been ninety years since our last great feast, and it will be ninety years before our next. And what poetry that it's now the hottest and brightest summer on record. We already have so much to give back. And so, without any further blathering, let's raise our glasses, and let our nine-day feast commence. Skål!"
— Siv
Advertisement:

Dani (Pugh) and Christian (Reynor) are a young American couple with a relationship on the brink of falling apart. But after Dani's world is rocked by a tragedy, Christian reluctantly invites her to join him and his friends on a trip to a once-in-a-lifetime midsummer festival in a remote Swedish village.

What begins as a carefree summer holiday in a land of eternal sunlight takes a sinister turn when the insular villagers invite their guests to partake in festivities that render the pastoral paradise increasingly unnerving and viscerally disturbing.

A director's cut (a little under a half-hour longer than the theatrical cut) was given a limited theatrical release for one weekend on August 29th, 2019, with a brief AppleTV exclusive release in September and a BluRay release in late October.

Not related to the British television series Midsomer Murders.

The ending scene of Midsommar depicts people being burned alive inside a building accompanied by an uplifting music piece.

The ending scene of Midsommar depicts people being burned alive inside a building accompanied by an uplifting music piece.