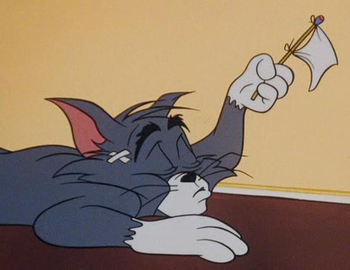 Suppose you either are facing truly insurmountable odds, or are just the kind of quitter who panics at the first sign of trouble. You might want to surrender. A good way to do so non-verbally is to hoist and wave a white flag.

Don't use it just to lure your enemies closer for a clear shot, though — that is a war crime. White flags can also be used for negotiating things other than surrender (e.g., a prisoner exchange) — the basic meaning behind the white flag is "Don't shoot, we wish to talk about something."

Sometimes a character will raise a white flag, only for it to be shot off or filled with bullet holes. In this instance, fight away.