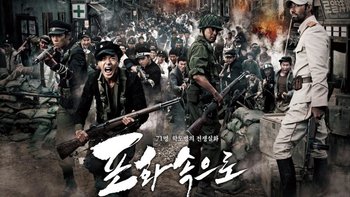 The seventy-one student soldiers charging into battle against all odds...
Advertisement:

71: Into the Fire is a 2010 Korean War film starring Cha Seung-won, Kwon Sang-woo, Choi Seunghyun (T.O.P), and Kim Seung-woo, as members of 71 Korean student soldiers being drafted into war against their will.

Made in commemoration of the heroes who fought during the Korean War, the film is very loosely based on the student-soldiers of South Korea, who gave up their lives during the Battle of P'ohang-dong (August 11, 1950). Against a platoon of North Korean forces, specifically the feared 766th Unit, the 71 underage soldiers defended the P'ohang girls' middle school, a strategic point for safeguarding the struggling Nakdong River perimeter for 11 hours before being finally overwhelmed, but their sacrifices bought enough time for the South Korean and American reinforcements to ambush and take out the North Koreans, ultimately winning the battle.

Much of the film is told from the perspective of Oh Jang-beom (Choi Seung-hyun), a student who have personally witnessed the horrors of war having been through the front lines and is made de-facto leader of the student infantry due to his experiences, and Ku Kap-Joo (Kwong San-woo), a rough delinquent and former gangster who's feared among the students prior to the war.

See also Taegukgi and The Front Line for similar films.

71: Into the Fire contains examples of: