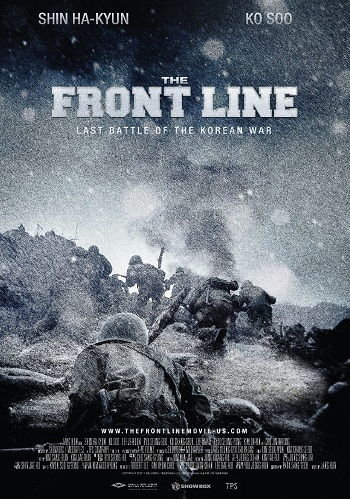 The Front Line is a 2011 Korean produced war drama about the closing days of the The Korean War. In mid 1950, South Korean soldiers, Kang Eun-Pyo and Kim Soo-Hyeok find themselves cornered by the relentless North Korean invasion. They both survive a meeting with a North Korean captain who spares their lives for the bigger picture; the pressing need for manpower post-war, where he claims the war would be over in a week.

Fast forward to 1953 where the war slowly draws to a close, as politicians and generals endlessly bicker over territorial claims and armistice conditions. The now-First Lieutenant Kang; a Counterintelligence Corps officer is sent to the eastern front of Aerok Hill to investigate an alleged murder of a South Korean officer and a possible mole within the famed Alligator Company. He is soon reunited with his old friend Soo-Hyeok, now a First Lieutenant in charge of an infantry platoon and meets several veterans with colourful personalities, despite the bleak war. He quickly finds himself in an endless battle for the hill with his new squad and not long after stumbles upon a secret that brings himself closer to the enemy than he would ever thought possible.....

This movie was South Korea's submission to the year's 84th Academy Awards for Best Foreign Language Film, but ultimately did not make the final nominations. One of the most unflinching portrayals of the Korean War next to the similarly themed Taegukgi: Brotherhood of War (2004), it has won several local film awards as well as critical acclaim overseas.