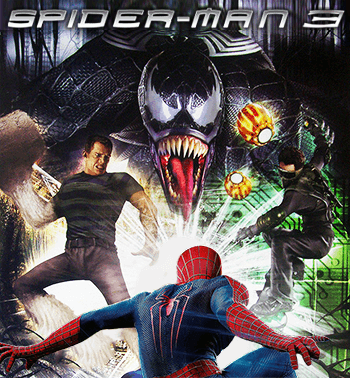 Which villain will come out on top?
Advertisement:

The story features two or more Big Bads, each of whom has their own distinct agenda and resources. The result can be Evil Versus Evil, Eviler Than Thou, Enemy Mine, Villain Team-Up or Big Bad Duumvirate, but it may be the case that none of the villains have anything to do with each other, and may not even be aware of each other. Played straight, each major villain should be of a comparable threat level to prevent one from overshadowing the other(s).

Having multiple main villains can bring new dimensions to the story and make it more complex and less predictable. It can force The Hero to face a range of different challenges — for example, maybe one villain seeks to Take Over the World while another is a more personal enemy from his past, though it's possible for both Big Bads to have identical goals without making the story any less interesting.

The success or failures of one Big Bad can affect the fortunes of another, as they may have to consider each other in their plans, or might try to profit from another's defeat. The hero might defeat one villain before fighting another, or might regard one as more dangerous or important than the others. The Sorting Algorithm of Evil may be either avoided — if all the Big Bads are equally powerful and dangerous — or inverted, if some are more powerful and/or more dangerous than others.

Remember this must be simultaneous — if a new Big Bad arises only after another is defeated, then this does not count; that's Arc Villain. See also Rogues Gallery, which is similar but usually forces established villains to act as Monster of the Week. When there are so many Big Bads involved that one needs a score card to keep them straight, this is The Big Bad Shuffle. See also Gambit Pileup; something that usually results from this trope when the big bads plot against each other for power in the same way they plot against the good guys, which can also sometimes result in a Mêlée à Trois between the heroes and the two big bads. Contrast with Villain Exclusivity Clause when only one villain is allowed and Villain of Another Story, where other villains appear but their conflicts are not in focus.