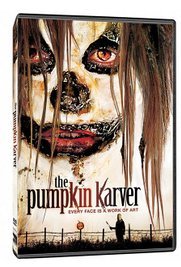 "Every face is a work of art."

The Pumpkin Karver is a 2006 Slasher Movie.

A young boy kills his sister's boyfriend thinking he's trying to hurt her. A year later, the siblings have moved to a new town and are having a Halloween party at a farm with her friends. However, a murderer is stalking the farm...