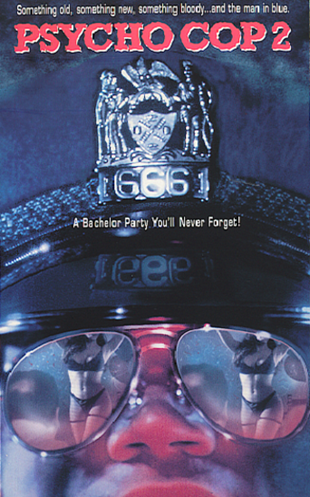 Something old, something new, something bloody... and the man in blue.
— Tagline
Advertisement:

The sequel to Psycho Cop, released in 1993, in which the ever-puntastic devil-worshipping cop-impersonator Joe Vickers continues to enact his special brand of law and justice.

The film opens with Vickers hearing about a bachelor party from two office workers, which will be secretly held in an office building at late-hours, which is going to include booze, drugs and hookers. He then follows the two men to the party, locks the doors and starts killing everyone stuck inside with him.

This movie ditches the deritative teenkill-aproach from the previous film, and goes over the top with its presentation; gore, nudity and laughably bad puns are all over the place.