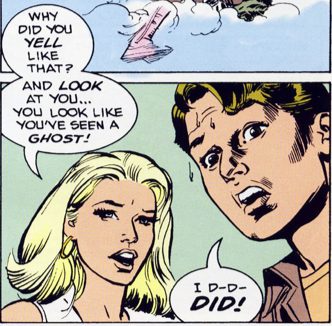 Random Guy: What's the matter? You look like you've seen a ghost!
Random Guy #2: (points to Martha) I just did! Look!
— Half Magic
Advertisement:

A Sub-Trope of Literal Metaphor. When characters enter screaming and running from a ghost (or any supernatural creature that would frighten your average Muggle), it is customary for a Genre Blind character to say in complete jest, "What's wrong with you? You look like you've seen a ghost." Alternatively, the line may be said mockingly by the 'ghost'—whether they're literally a ghost, some other kind of undead, or merely wrongly believed to be dead—themselves.

Parodied and subverted like crazy these days, but the mystery abounds as to why this isn't a Dead Horse Trope yet. A Sub-Trope of I Was Just Joking.