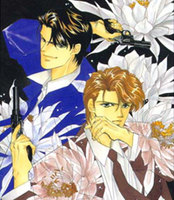 FAKE is a pair of Boys' Love manga and a one-shot anime by Sanami Matoh that take the Ho Yay inherent in many buddy cop films and follow it to its natural conclusion.
Advertisement:

When Randy McLean joins the NYPD'S 27th Precinct, he is paired up with the department troublemaker, Dee Laytner. On learning that Randy is half-Japanese, Dee decides that Randy should be called by his Japanese moniker, Ryo, and that is how the character is referred to for the rest of the series.

Almost immediately, Dee expresses an attraction to Ryo, which Ryo isn't sure how to respond to. After their first case, Dee steals a kiss from his surprised partner—and for the rest of the series, spends most of his time in romantic pursuit of his not-always-reluctant target. Ryo's adopted son, the delinquent Bikky, and Bikky's (girl)friend Carol alternately help and hinder their relationship, while other members of the cast, including JJ Adams, a marksman with a crush on Dee since their police academy days, and Berkeley Rose, an inspector with his eye on Ryo, try to keep them apart.

Dee and Ryo initially form the typical chalk-and-cheese double act, with the usually steady and sensible Ryo trying to keep the more impulsive and careless Dee under control (and handling the paperwork resulting from those cases where he doesn't quite manage to do so). However, as the series continues, it becomes clear that things aren't quite as clear-cut as they seem; Ryo has some issues that can trigger a surprisingly violent and irrational temper, while Dee looks out for the kids at the local orphanage. Both have pasts that mysteriously tie in with the city's extremely active, but equally elusive, Mafia family.

Notable as a yaoi/shounen-ai series with more than romance in the plotline: Dee and Ryo's role as cops is as crucial to the plot as their relationship.

Takes place a about a year after the events of FAKE. Things have changed for the guys. Ryo and Dee are now a steady couple and Ryo has officially adopted Bikky. Soon things change even more as Dee and Ryo, along with (Formerly Those Two Guys) Drake and Ted, are offered a chance to join a new task force in conjunction with the FBI. They accept and soon form a Five-Man Band, when JJ requests to join.

The series was adapted into a one-episode OVA anime.