Did You Just Have Sex? 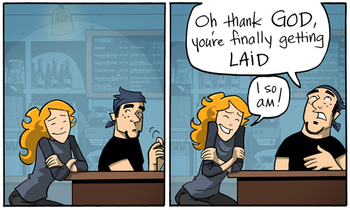 This is when a character not known for their sexual prowess acts differently enough (usually more cheerful or mellow) for other characters to notice and question it. They (and sometimes the audience) find out that it is because said character somehow got laid.

(Alternatively, they'll go through the Did You Get a New Haircut? routine.)

Normally used on characters that are a bit grumpy or disillusioned, proving that all they needed was to get laid. It's almost Always Male in this case, as the female equivalent is more subdued.

Compare to Virgin Vision, where another person can tell a character has had sex without any clues being given off, and Virginity Flag, where there is a blatantly obvious sign of the loss of virginity. See also Sex Dressed and Sexy Shirt Switch.

Not to be confused with Did They or Didn't They?.