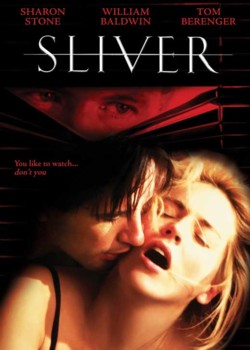 Carly Norris (Stone) is a successful book editor. She has recently come out of a bad marriage and goes apartment hunting. She finds her dream apartment in the Sliver building. She gets to meet new love interests in thriller novelist Jack Lansford (Berenger) and her landlord Zeke Hawkins (Baldwin). Zeke introduces her to new erotic thrills. First to the joys of exhibitionism, by having her remove her panties in a crowded restaurant and place them on the table. Second to the joys of voyeurism. He has placed surveillance cameras and microphones in every apartment of the building, since he likes to spy on other people. Carly soon gets addicted to observing others peoples' lives.

But all is not well within the Sliver building. A number of recent "suicides" and lethal "accidents" point to a killer being on the loose. And her love interests are the prime suspects. Carly has to find out the truth before she suffers an "accident" of her own.