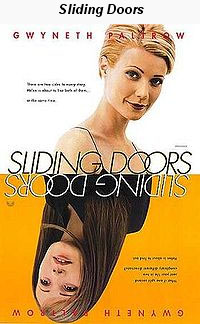 Helen Quilley (Gwyneth Paltrow) just got fired. And now she missed the Tube, too. Some kid was in her way, slowing her down for a second.

But wait! She didn't miss the tube! The mother of the kid pulled the kid away, so Helen was never slowed down.

The Helen who got on the tube meets an interesting guy on the tube, and when she gets home she catches her boyfriend cheating. She breaks up and gets an Important Haircut, turning blonde.

The Helen who missed the tube gets robbed, and comes home to be comforted by a boyfriend who had more time to cover his tracks a bit. She keeps her old hairstyle and remains brunette.

As time goes by, blonde Helen and brunette Helen live increasingly different lives. And yet they seem to somehow remember each other, each of them getting a sense of déjà vu when encountering something that is important in the counterpart's life.