Something Only They Would Say 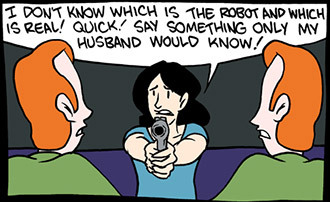 The polar opposite of a Not Himself or Out-of-Character Alert; a character in disguise or otherwise hidden reveals themself to friends by saying something only they would say.

Undercover agents and victims of a "Freaky Friday" Flip will occasionally use Something Only They Would Say to positively identify themselves. Also handy in figuring out which twin is the Evil Twin, or when you're in the middle of a Twin Switch (though just as often, it's keyed off of Out-of-Character Alert).

Sub-Trope of Trust Password, which is for general things to establish trust, instead of an utterance so specific to one person that it identifies just them.

Compare You Just Told Me, Ironic Echo, Cover Identity Anomaly, So Crazy, It Must Be True, and Bluff the Impostor. No One Else Is That Dumb is a Sub-Trope. If it's something that anybody from a particular group or with specific knowldge can answer, that's Only the Knowledgable May Pass. Contrast Out-of-Character Alert where a character wants to remain unidentified but say the identifying phrase out of habit, which at best makes someone just a touch suspicious.

Alternative Title(s): As You Wish