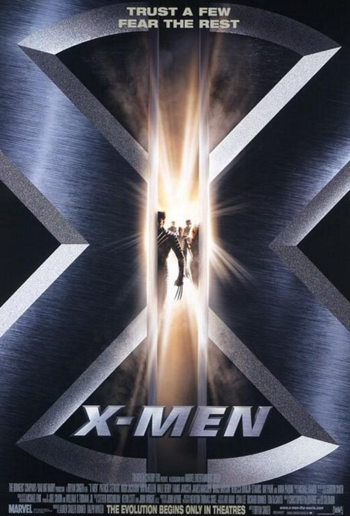 "We're not what you think. Not all of us."
"We are the future, Charles, not them! They no longer matter!"
— Erik Lensherr / Magneto
Advertisement:

X-Men is the first movie in the X-Men Film Series directed by Bryan Singer, based on the celebrated comic book franchise of the same name. It came out in 2000.

It starts with some guy with claws, and a runaway teenage girl who accidentally puts her boyfriend in a coma by kissing him. She's named Marie, but calls herself Rogue, and hitchhikes with the guy-with-claws ("Logan") until they get attacked by a big guy who also has claws, just less cool ones, and then are rescued by a guy wearing a weird visor and a woman directing a snowstorm.

Um... okay, so, comic books can be a little goofy at times.

Logan wakes up in the infirmary of a school. Unlike most schools, this one teaches Mutants—people like Logan who have unusual powers. The school also has its own team of superheroes: the X-Men. The bald, wheelchair-bound psychic Professor Xavier runs both the school and the X-Men, and he offers for both Logan and Marie to stay with them.

After introducing these major characters, the movie gets to work on the plot: Magneto (the boss of the bad guy with claws) has invented a machine that turns humans into mutants (with the unfortunate side effect of killing them shortly after). He mounts the machine in the torch of the Statue of Liberty, with the intention of using it on a major UN Conference. Unfortunately, using the machine that much would kill him, so he kidnaps Marie (aka Rogue) with the intention of forcing her to absorb his powers and run the machine for him. Wolverine leads the rescue effort.

open/close all folders
#-I
J-Z
Magneto: The war is still coming, Charles, and I intend to fight it, by any means necessary.
Professor X: And I will always be there, old friend.
Feedback

Storm delivers the greatest pre-mortem one liner in all movie history!

Storm delivers the greatest pre-mortem one liner in all movie history!