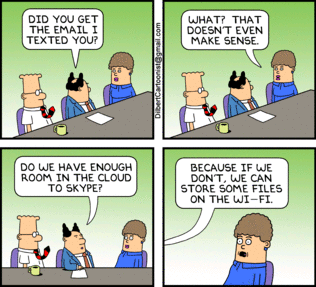 "Mr. Madison, what you've just said... is one of the most insanely idiotic things I have ever heard. At no point, in your rambling, incoherent response, were you even close to anything that could be considered a rational thought. Everyone in this room is now dumber for having listened to it. I award you no points, and may God have mercy on your soul."
— High School Principal, Billy Madison
Advertisement:

Sometimes when a plan or idea is proposed, the regular insults and even a facepalm just don't cut it. Nope, they've crossed the line into what can be called a Crowning Moment of Stupidity, and the witness feels the need to comment on this.

Variations can include "dumbest", "most idiotic", "most ridiculous" etc., but the same basic message applies. Sometimes, as the page picture demonstrates, a verbal response isn't even necessary and Facial Dialogue does all the work.

However, if it's said too liberally or about something that everyone in-universe knows actually isn't stupid, they, in turn, open themselves to ridicule, as seen on The Internet where it's become so overused that it's turning into the I'm Your Worst Nightmare of insults.

May be combined with Who Would Be Stupid Enough?. Contrast Crazy Enough to Work. If the person being castigated winds up being correct, this can become The Cloudcuckoolander Was Right. If a prediction we know comes true is met with this, it's a form of It Will Never Catch On.