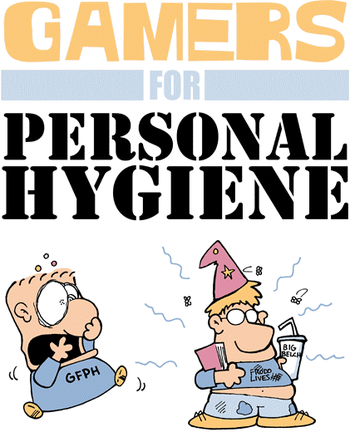 "When I was in high school, some kids were passing around fliers for the Asian Student Alliance and asked if I wanted to join, and I was like, 'Eh, I'm Asian enough. [nervous laughter] Did it HAVE to be on YELLOW PAPER?! Oh my God, you guys!'"
— Margaret Cho
Advertisement:

A member of a social group criticizes fellow members of said group for perpetuating behavior that mainstream society deems negative. The reproach may be anything from gentle needling to a knockout punch to a high-profile rant against the transgressors. Whatever the form, the Stop Being Stereotypical message is usually one against those actions that are embarrassing the group and hinder their efforts for wider acceptance. This is known in The Other Wiki as "respectability politics."

Typically, this may reflect divisions of class (such as middle-class black people living in Suburbia complaining about the "ghetto" behavior of unruly ones in the cities), gender expression (such as gender-conforming gays complaining about "flaming" gays, or a Tomboy complaining about a Girly Girl because Real Women Don't Wear Dresses), ideology (such as people railing against the extremists of their religious or political ideology), or conformity to mainstream social rules (such as fanboys complaining about peers who won't even bother with personal hygiene). Whatever the group involved, the criticism is generally not of the behavior in itself, but of the way it "makes us look bad." Indeed, sometimes the complainers will engage in the behavior themselves, but will be careful to do so only in private; this, in turn, might cause the accused party to take the moral high ground over this hypocrisy.

If the criticism is leveled by a character in a work, it may be a Very Special Episode or an Author Tract. It might also be done by a Real Life creator as an attempt at reforming the group.

Telling others to Stop Being Stereotypical is not always presented in a positive light. The person making the criticism might be presented as being overly submissive to the norms of mainstream culture. A common response to "Stop Being Stereotypical" is "I don't care what they think." Both sides may end up calling each other Category Traitors. The recipient of the criticism will be accused of hurting the group by making them look bad, while the one who gives the criticism might be accused of being a Boomerang Bigot or an Uncle Tom.

Sometimes the deliverer of this criticism is a bigot from outside the group: he's usually a Troubled Sympathetic Bigot who really wants to accept the group he hates (or at least realizes that he simply has to do so to be polite), but finds certain members of the group, whom he considers representative, to be so darned stereotypical in their behavior that they've put him off the entire group. In these cases, Stop Being Stereotypical overlaps with Why Do You Make Me Hate You?

Note that there is nothing limiting a Stop Being Stereotypical message to any particular type of assembly. Mathematically speaking, any sufficiently large crowd will have people who act against the group's interests and serve as the target of such a message. For example, most sports fans are simply enthusiastic supporters of their team, but all fans get a black eye when a few Fan Dumb members go overboard and start riots if their team loses (or wins).

A Cultural Personality Makeover is likely to result in this message.

This trope is often used to sympathize with any group being unjustly generalized. This can become controversial, so No Real Life Examples, Please!

Also see Broken Base, a common place for enthusiasts to sling such accusations against each other, and Vocal Minority, which emphasizes that the stereotypes are the tiniest but loudest part of a given group. Don't Shoot the Message is the ideological variant of this, when the person complaining supports what's being said, just not how it comes across. Compare My Species Doth Protest Too Much (when non-humans come onto the scene), Self-Deprecation (this trope's self-directed and generally more comedic cousin), Stereotype Reaction Gag (when the stereotype turns out to be correct) and Cultural Cringe. Contrast with Boomerang Bigot and with Klingon Scientists Get No Respect, who aren't stereotypical and get flack for it.

Have You Ever Heard of Qwark?

Mariner accuses the poacher Ferengi of playing into Ferengi stereotypes in their villainy, even calling them "Last Outpost"-style throwbacks.

Have You Ever Heard of Qwark?

Mariner accuses the poacher Ferengi of playing into Ferengi stereotypes in their villainy, even calling them "Last Outpost"-style throwbacks.