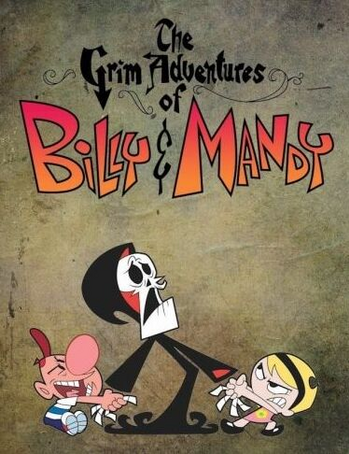 The Grim Reaper (Greg Eagles) has come for a soul — specifically, a hamster in his dying days — but he's thwarted from taking the hamster to the afterlife by two children: the blissfully idiotic Billy (Richard Horvitz) - the hamster's owner - and his cynical, amoral best friend Mandy (Grey Griffin). The pair challenge "Grim" to a limbo contest to save the hamster; when Grim loses (through Mandy's cheating) he becomes Billy and Mandy's newest friend — and by "friend," we mean that he's contractually bound to cater to their every whim.

Grim is now (begrudgingly) forced to serve as something of an underworld version of Mary Poppins, thanklessly placating Billy's demands for cheap entertainment and Mandy's schemes for self-profit with his magical scythe while desperately trying to find a way to be rid of the duo for good.

Rounding out the show's cast are Billy's parents Harold and Gladys, who have unfortunately passed their respective stupidity and insanity onto their son; Irwin, Billy's other best friend and the Token Minority (who also has a massive, unrequited, crush on Mandy); Sperg The Bully; Mindy the Alpha Bitch; Pud'n, Billy and Irwin's sometime-friend; Hoss Delgado, a supernatural bounty hunter with more brawn than brains; Eris, the goddess of chaos and discord; General Skarr, formerly seen in Evil Con Carne, who moves in next door and now wants to just garden instead of conquer the world; Nergal, the Sumerian Death God who lives in Earth's molten core and just wants to be friends with everyone, really; Nergal Jr., Nergal's son and Billy's cousin; Jeff, a friendly Giant Spider who's convinced Billy is his father (much to Billy's horror); a Redd Foxx-inspired version of Dracula who is Irwin's grandpa; and Fred Fredburger, a green Cloudcuckoolander demon...thing who is just as dimwitted as Billy, if not more. Adventures abound as the human duo and their unwilling friend interact with others in their lovely little town of Endsville, facing down all sorts of opponents, from the school bully to sometimes homicidal neighbors to Eldritch Abominations born from the most terrifying pits of the human mind.

The cartoon lasted seven seasons (2001-2008) with two Made For TV Movies; Billy & Mandy’s Big Boogey Adventure and Wrath of the Spider Queen, a couple of specials — including a crossover with Codename: Kids Next Door note Coincidentally, the only other CN series to be greenlit based directly on fan voting. — and a spin-off attempt titled Underfist: Halloween Bash.

The Grim Adventures of Billy and Mandy provides examples of:

!sdrawkcab ti gnidaer er'uoY !egap eht fo dne eht si siht ,on oNnote No no, this is the end of the page! You're reading it backwards!
Feedback

Example of:
Dream Within a Dream