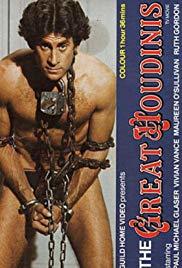 The Great Houdinis is a 1976 TV biopic of Harry Houdini, starring Paul Michael Glaser, written by Peter Benchley and Melville Shavelson, and directed by Shavelson, that aired on ABC on October 8, 1976. It was broadcast again on April 6, 1977 as The Great Houdini.
Advertisement:

The movie focuses on the relationships between Harry, his wife Bess (Sally Struthers), and his mother Cecilia (Ruth Gordon), as well as Harry's failed attempts at contacting Cecilia after her death and his efforts to discredit spiritualism.

The Great Houdinis contains examples of: