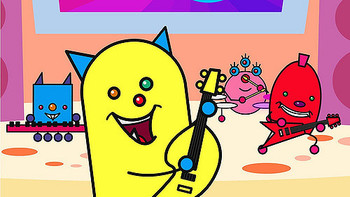 From left to right: Bluz, L.O., Ink, and Frred
Advertisement:

Happy Monster Band is a show that aired on Playhouse Disney about... a happy monster band.

The band consists of four members: Frred, the band's vocal output; L.O., who plays bass guitar; Ink, the drummer and the only female in the band; and Bluz, the keyboardist. The band's performances are introduced by Roc and Raoul, a purple two-headed monster who speak in rhyme when they aren't backstage.

By the way, the show's songs are performed by Tally Hall.note Well, unless you happen to be watching the British English dub, where all of the band's singing voices are changed. Yes, really.