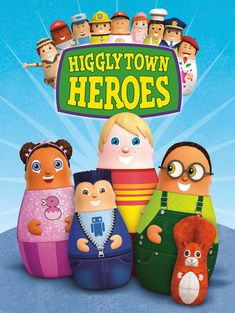 Higglytown Heroes is a Playhouse Disney cartoon set in Higglytown (of course), a town populated by people who resemble nesting dolls.

Our heroes (no pun intended) are four kids, Eubie, Wayne, Twinkle, and Kip, plus Fran the talking squirrel. Once per Episode, the kids find themselves in some kind of troublesome situation that gets fixed by a "hero" working in a specific occupation (such as a doctor, a plumber, etc.).

This show contains these tropes: