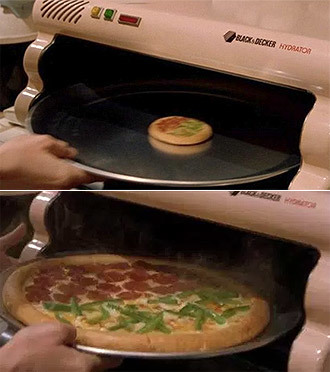 Dehydration is a wonderful thing in fiction! It can make anything from creatures to base elements shrink to a easily portable size, and all you need to do to return it to the way it was before is to put a drop of water on it!

Perhaps writers used to have a lot of those expansive sponges or they're very familiar with the factoid that a person is 70% water (a house is seventy percent bricks but try throwing some bricks at some concrete, metal poles and some roofing tiles). However the origin seems to be connected to Food Pills and the idea of astronaut food. Sailors, soldiers and astronauts have needed easily transportable, highly nutritious and long lasting ways of cooking and storing food (and in the case of astronauts, something you can eat in zero gravity), when trying to think of what might be useful for life (IN SPACE!), something like this trope turns up.

In a way it's connected to the tendency in sci-fi for large, complex objects to fold or retract into small ones, such as George Jetson's car turning into a suitcase, those vanishing animal-head masks in Stargate SG-1, or the capsule items in Dragon Ball. In all of these cases, the shrunken item is easily carried, implying all that mass actually went somewhere else. At the very least, there's an overarching trope here- the idea that if you make an object smaller, it magically gets lighter too.

There is an element of Truth in Television to this trope, at least as far as foodstuffs with a high water content go, as water actually is quite dense. A 1m x 1m x 1m cube of water weighs in at a metric tonnenote Allowing for some variation based on the water's temperature so if you can remove the water from a foodstuff you can remove a significant chunk of its mass. The reconstituted product you get from adding the water back is rarely remotely as palatable as the pre-dehydration product was (though some fruits make quite enjoyable snacks as dried fruit).