Western Animation / Cloudy with a Chance of Meatballs 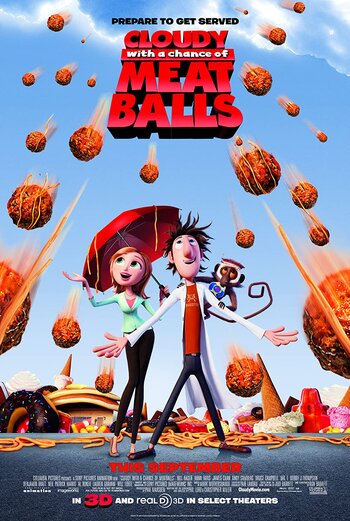 It's a MEATIER shower!
Advertisement:

Cloudy with a Chance of Meatballs is a 2009 CGI animated film loosely based on the children's book of the same name.

Living on a remote island in the Atlantic Ocean called Swallow Falls with his widowed father Tim and his pet monkey Steve, Flint Lockwood always dreams of "inventing something AWESOME," but his inventions never quite work out the way he wants them to. Even when he grows up, he still prefers to invent more and more things instead of getting a suitable job at his father's sardine bait shop.

But with sardines being all the island's residents have available to eat, Flint becomes a hero when he invents a machine that can convert water into any kind of food the user wants! This makes him world-famous thanks to the coverage of junior anchorwoman Sam Sparks, who Flint develops a crush on. But can he keep the machine under control, get his father's approval, and win Sam's heart?

The film was produced by Sony Pictures Animation, who also made Open Season and Surf's Up, and was directed by Phil Lord & Chris Miller, the same two guys who created the short-lived animated show Clone High, and would go on to make 21 Jump Street (and its sequel), The LEGO Movie, and fellow SPA film Spider-Man: Into the Spider-Verse. Cloudy has had the biggest opening week for Sony Animation until Hotel Transylvania beat that in 2012, and it stayed in 3rd place in the box office after a month in theaters. It was also nominated for a Golden Globe award.

A sequel, Cloudy with a Chance of Meatballs 2, was released on September 27th, 2013.

An animated series, co-produced by Sony, DHX Media, and Corus Entertainment and serving as a prequel to the film, first premiered on Cartoon Network in the United States on February 20, 2017 and YTV in Canada on April 10, 2017. The TV series has its own page here.

Example of:
Awesome, but Impractical