The Elevator from Ipanema 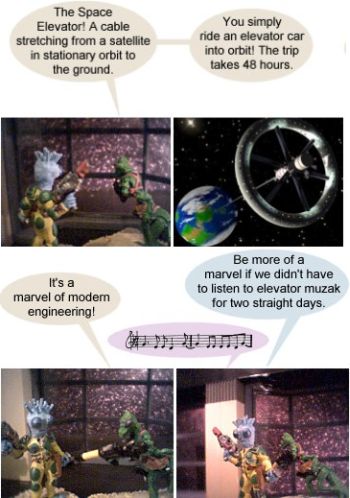 "Tall and tan and young and lovely
The girl from Ipanema goes walking
And when she passes,
Each one she passes goes, 'ah' "
— Antônio Carlos Jobim, "The Girl from Ipanema" (yes, the song has lyrics)
Advertisement:

For the best reading experience, play the music from this video

In movies and TV shows (regardless of genre), when a character gets onto an elevator for any reason, the music playing on its speaker system will almost always be some instrumental version

of "The Girl from Ipanema" by the great Bossa Nova musician Antônio Carlos Jobim. (If not, it will probably be the "Theme from A Summer Place

", most likely referencing a comfortable break from the action.)

This trope's ubiquity can be traced back to such directors as John Landis, who used it as an in-joke for every scene he shot inside an elevator in his movies.

In Real Life, of course, it was once a common practice for elevators to have soft instrumental music piped in as a means of relaxing the nerves of jittery or claustrophobic passengers. Similar background music was also widely played in office waiting rooms, supermarkets, department stores, and shopping malls, and even on radio via the "beautiful music" format. This fell out of favor in the 1990s, however, and since then the smaller number of places (including the relatively few elevators) that have piped-in music at all will generally use the original songs rather than the instrumental knock-offs, making this a largely Forgotten Trope, as well as a Dead Horse Trope in the case of this particular song.

Still, even to this day lots of films and TV shows will add in music when composing elevator scenes, in part because of the Rule of Funny (people looking straight ahead and not talking to one another while soothing music plays is inherently quite funny), in part because audiences still expect the music, and in part to avert Dead Air, which can make the elevator ride somewhat uncomfortable to watch (unless that's the intention of the filmmaker).

), Music Choice ("Easy Listening"), and Mood Media ("Easy Instrumentals"), ready to be piped into elevators once again at a moment's notice.

Usually an integral part of an Uncomfortable Elevator Moment.