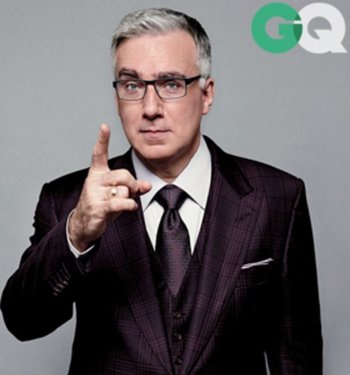 "I'm difficult for management. That's why I have the reputation because nobody challenges management."
Advertisement:

Keith Theodore Olbermann (born January 27, 1959) is an American commentator, originally known for sports commentary, but in the mid-2000s became equally well-known for his political commentary.

A graduate of Cornell in 1979, he started in sports broadcasting at the wire service UPI in 1981 before moving on to the sports division of the newly-founded CNN, and then local sports broadcasting in Boston and then Los Angeles. In 1992, he joined ESPN's SportsCenter as co-anchor with Dan Patrick. His tenure is considered to be the point where Sports Center really took off, with his on-air persona inspiring one of the characters on the short-lived Aaron Sorkin drama Sports Night. After disputes with management, he left in 1997, seemingly burning his bridges in the process, though he would remain friends with Patrick.

It was at this point Keith would make his first foray into non-sports news, as host of a primetime news show on MSNBC, The Big Show with Keith Olbermann, a reference to a book he had co-authored with his former Sports Center co-host Dan Patrick. The show began to focus more and more on the 1998 Monica Lewinsky scandalnote A scandal Keith considers to be overblown and which he often mentions in a derisive way to point out how news had gone down the drain at this point in time, causing Keith to quit and go back into sports, this time at Fox Sports, who fired him in 2001. He would hold a series of journalistic odd jobs for a few years, writing a column for Salon, freelancing for CNN, and filling in for radio broadcaster Paul Harvey.

In 2003 he went into political journalism at MSNBC again, this time with much more success than the last: Countdown: Iraq, the show that would shortly evolve into Countdown with Keith Olbermann. It found its voice as a left-wing foil to shows such as those found on Fox News Channel. Among the recurring segments were "The Worst Person in the World", in which bronze, silver, and gold medals were awarded to politicians and pundits that had performed particularly repellent gaffes, scandals, or general fuck-ups that week - though a part of the people on the list were "awarded" the honor as a joke and Keith even put himself on the list from time to time. Not all who were put on the list found the "joke" particularly funny, though. Bill O'Reilly was an early and frequent recipient of this award, and this led to a long and recurring feud between the two.

Just before the 2010 U.S. elections, Olbermann was suspended for making donations to three candidates for office without seeking MSNBC approval. A petition was circulated to get him reinstated, and while it looked like all would be back to normal, in January of 2011 he announced he was quitting MSNBC. Shortly thereafter a new show, also named Countdown With Keith Olbermann, would feature on Al Gore's CurrentTV network, following the same formula. CurrentTV fired him after less than a year, and itself folded in 2013. His departure from Current was almost as tumultuous as his departure from ESPN had been and some issues ended up in court.

On July 17, 2013, Olbermann re-joined ESPN, prompting reactions of Cue the Flying Pigs considering how acrimonious their earlier split had been, and a sign of just how seriously ESPN took Fox's heavily-hyped sports network. They launched a new late-night sports-based show titled Olbermann on August 26 on ESPN2, a hybrid of his sports (highlights, or as they were called "Keithlights") and political (Worst Persons, interviews with people in sports and sports-fan friends of Keith's, commentary that aired at the start of the show this time, and for the first year, Time Marches On, all sports-centric) pasts. As the show continued, rumors began to circulate that higher-ups at ESPN were becoming concerned with Olbermann's continued taking of Countdown-style shots of people and sports organizations when on-air, particularly at the NFL its chairman Roger Godell, over the league's handling of on-field head injuries and domestic violence cases involving players. (ESPN has a deal with the NFL that runs through 2019 worth over $15 billion.) ESPN, in late 2014, had already cut the show to a half-hour and moved its timeslot from 11PM to 5PM, but if the moves were meant to dull Olbermann's edge, they didn't succeed.note In fact, the move was perceived at the time as benefitting Olbermann, since the late-night time slot resulted in the show being bounced around the schedule or to ESPNEWS depending on when sports events on ESPN and ESPN2 ended, making it hard for people who wanted to watch the show, and didn't care about its lead-in, to catch it.

In the summer of 2015, news leaked that ESPN was going to pass on renewing Olbermann's contract. Olbermann signed off on July 24th, 2015 after a little less than two years on the air. ESPN maintains the move was not over content, but that the cost of the show was prohibitively expensive.note And given that they parted ways with Bill Simmons and Colin Cowherd at about the same time, they might be telling the truth, although Simmons had his own criticisms of Goodell that directly resulted in a suspension and as an occasion to announce that his contract wouldn't be renewed.

that Olbermann could return to MSNBC, that his voice would be welcomed by many considering the upcoming 2016 US election cycle. Indeed, after making an appearance on ABC's The View in which he criticized Republican front-runner Donald Trump, Olbermann stated that he would be "coming out of retirement." In September 2016, he teamed up with GQ magazine for a bi-weeklynote or more, if Keith feels like it Web Video series called The Closer (no relation). These relatively short videos (usually less than ten minutes) echo the Special Comments of his Countdown days. After Trump won, the series was retitled The Resistance with Keith Olbermann. In the final episode of The Resistance, November 27, 2017, Keith declared that the Trump Admin would soon end, and he abandoned most political commentary (save for a snark here and there on Twitter) to return to ESPN, while continuing to raise money for rescue groups to save condemned dogs on NYACC's death row. In 2014, he branched out into voice acting, in the Netflix series BoJack Horseman, as the voice of Tom Jumbo-Grumbo, the blue whale news anchor on MSNBSea.

Three years later, on October 7, 2020, with the said Administration still in place and the 2020 election just weeks away, Keith returned to political commentary with a YouTube show entitled, of course, Worst Person in the World.

And in the wake of the COVID-19 Pandemic, Keith had some very strong messages about the Trump Administration's mishandling of the calamity and, more recently, the safety and necessity — and advantages — of vaccinations. "I went somewhere last night.

I took the subway. I didn't wonder if I was gonna die. Not once. There's lots involved in deciding to get the vaccine but this is the bottom line: YOU DON'T THINK YOU'RE GONNA DIE."