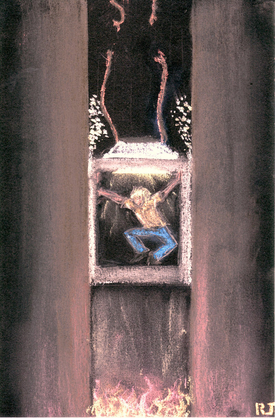 "There's no using the stairs tonight
Black box will take you right
Many floors down where the earth is fire and molten."
— The Builders and the Butchers, Black Elevator
Advertisement:

The Hellevator is an elevator that serves as a bridge between the world of the living and that of the dead. And that's really about it.

The main advantage of the Hellevator in fiction, particularly visual fiction, is that's it's an obvious way of letting the audience know that they're going deep beneath the surface of the Earth. A mystical hell-traveling elevator is surprisingly plausible because people, especially children, often don't understand how elevators work. This was certainly more true back when the trope was first introduced with early film (back then only employees of elevator buildings were even allowed to operate them) than it is today, but the trope lives on largely because of its obvious visual appeal. When an elevator goes down for several hundred floors, it's pretty difficult to come to any other conclusion as to where it's going. Additionally, an enclosed elevator provides a sense of being trapped as it descends — you can always stop going down a tunnel or staircase, or even climb back up an escalator, but if the elevator starts plunging down you can't do anything but wait until it opens... and pray. Even better, it's cheap to make the set. Animated works will sometimes depict the Hellevator as an escalator or a roller coaster. Expect to see floor numbers passing by at an increasingly rapid rate, only pausing to blink on the six a few times.

Not to be confused with the Hellevator, the lunar-based Space Elevator in Schlock Mercenary or the TV series.

See Stairway to Heaven for its sister trope (usually, there are stairs or an escalator leading to Heaven, but an elevator to Hell for some reason), and Evil Elevator for when the elevator itself tries to kill you. May head to wherever somebody Dug Too Deep.

And yes, this trope title and Stairway to Heaven could both be considered Fridge Brilliance since it's easier to be immoral (and stand lazily in an elevator) than it is to be moral (and climb stairs).