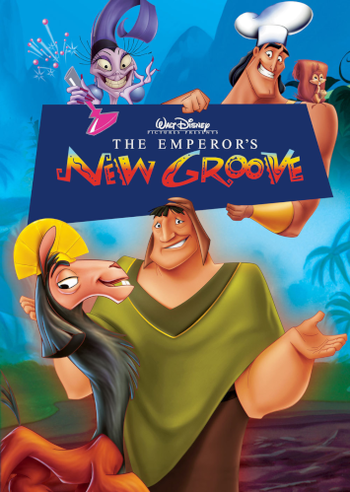 "Beware the Groove."
Yzma: What?! A llama?! He's supposed to be dead!
Kronk: Yeah. Weird...
Advertisement:

A very atypical animated movie from Disney. Hugely self-aware and a lot more risque than the previous entries in the studio's canon, The Emperor's New Groove is a film that trawled the deepest levels of Development Hell and finally emerged as a heavily comedic film that veered heavily away from its original concept of an Incan version of The Prince and the Pauper. The film was directed by Mark Dindal, whose previous work, Cats Don't Dance, shares much of the same breakneck humor as Groove.

Kuzco (David Spade) is the spoiled young emperor of a mountainous jungle nation loosely based on the Incan empire of South America. On the eve of his eighteenth birthday, he fires his ancient adviser Yzma (Eartha Kitt) from her high-profile job, prompting her and her dimwitted but affable lackey Kronk (Patrick Warburton) to assassinate him. The plan misfires, and Kuzco is instead accidentally turned into a llama. He's forced to team up with good-hearted family-man peasant Pacha (John Goodman) on a dangerous trek through the jungle to reclaim his throne — while Pacha tries to teach Kuzco just a little bit of humility in the process. This all plays out more like a feature-length Looney Tunes cartoon than a typical Disney flick.

The film has no love story apart from that of Pacha and his pregnant wife, and has only two significant songs (both written by Sting after the other 90% of his soundtrack was discarded, and one of which is performed by Tom Jones).