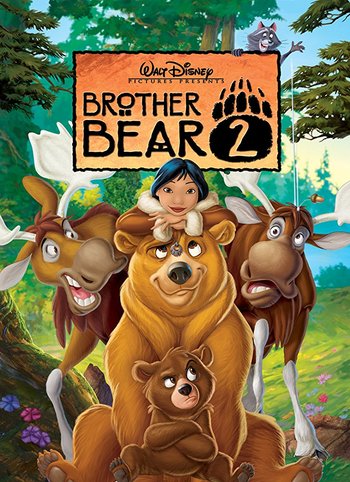 The 2006 sequel to Brother Bear, which continues the story of Kenai and Koda, and became the last Direct to Video Disney sequel to take place after its predecessor.note Disney's next three DTV sequels included a midquel, The Fox and the Hound 2, a What If? story, Cinderella III: A Twist in Time, and a prequel, The Little Mermaid III: Ariel's Beginning. Having woken up from hibernation and ready to go to Crowberry Ridge to eat berries, Kenai gets haunted by a memory of himself and a childhood friend named Nita. Said childhood friend is shown ready to get married to a chieftain's son from another tribe, but the spirits intervene, showing that she cannot marry him because of an amulet Kenai gave her, bonding them together. To get married, Nita reunites with Kenai (and Koda too), and they have to make their way to Hokani Falls.

This was Rick Moranis' final movie role before retiring from acting.