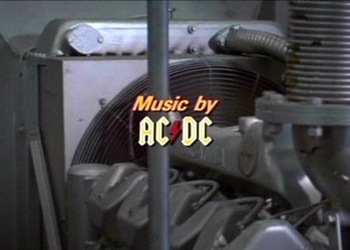 A soundtrack that rocks for a movie that shocks.
"I have the feeling that this movie is just a receptacle for songs David Bowie didn't want to release on any of his albums."
— The Nostalgia Chick on Labyrinth
Advertisement:

When you're setting up an All-Star Cast, who says you have to stop at actors?

The Pop-Star Composer is a famous musical figure, known primarily for their work with, well, popular music, who is hired by a movie, television, or video game studio to provide music and songs for their latest work. Think partially-or-completely washed-up rock stars and dueling divas. This is especially common for animated musicals—featuring lyrics and music by a famous songwriter seems a good way to draw audiences. If they already like Songwriter X, then they'll probably like the movie! Or so one hopes. Despite the trope title, the songwriter in question doesn't necessarily have to be an alumnus of the "pop" music genre—they just have to be known for performing something besides movie scores.

This particular practice has been somewhat all-over-the-place since it first began. Earlier, Trope Making examples sprouted up in The '80s with examples such as David Bowie doing the songs for Labyrinth and Queen doing a lot of the music for movies such as Flash Gordon and Highlander (they did not do all the music for these films, however, as admirers of Howard Blake and Michael Kamen will attest). But animated movies in The '90s really codified this trope, with examples such as Elton John doing the songs for The Lion King. In particular, animated movies with this kind of musical casting are prone to Award Bait Songs and composers/performers who used to be kind of cool once.

Ironically, the more mainstream and big-budget a live-action movie generally is, the less likely this trope will be used. With many Hollywood studios serving as corporate siblings of major record labels, "synergy" usually rears its head and a grab bag of artists from a label will be tapped to each provide a number for a movie soundtrack (it was common in The '90s to end TV ads with a list of performers who appeared on the soundtrack, no matter how briefly their work turned up in the actual film). Pop Star Composers usually work in animated features or smaller-scale films that aren't trying so hard to hit every potential radio market and can thus focus more on matching music to the moment.

And before you ask: No, Danny Elfman does not count, though he was in a band.