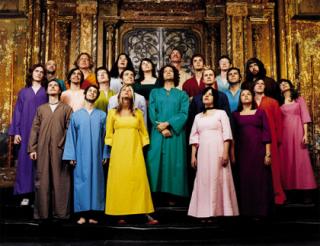 Together they're heavy.
Formed in 2000 by Tripping Daisy frontman Tim DeLaughter, The Polyphonic Spree is an orchestral rock band with many members, including those formerly in Tripping Daisy. All the band members are decked out in matching uniforms — mostly flowing robes in an Amazing Technicolor World of colors — and the music can be described as breathtakingly uplifting, even when the subjects can be a bit sullen every once in a while.

Tropes associated with the Polyphonic Spree: