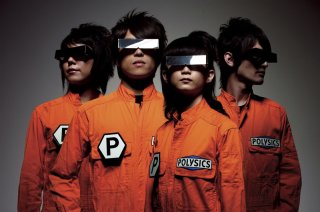 The band's most well-known lineup. From left to right: Fumi, Hiro, Kayo, and Yano.
"TOISU!"
Advertisement:

Polysics are a Japanese New Wave band originally founded by Hiroyuki Hayashi ("Hiro") in 1997. Hiro was heavily inspired by the American band Devo as well as Japanese bands such as P-Model and Yellow Magic Orchestra. To borrow a quote from That Other Wiki: "The band has been noted for their extremely energetic live performances and their wild gimmicky outfits, notably their trademark orange boiler suits, with a simple 'P' stamped on them, and their straight-bar sunglasses."

They did the intro and ending songs for Cells at Work! CODE BLACK.

Their official band page can be found here