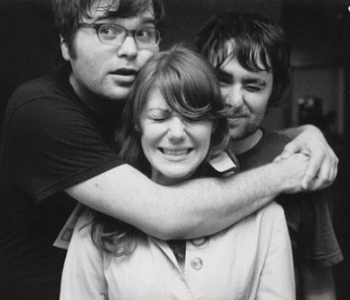 Left to right: Ben Gibbard, Jenny Lewis, Jimmy Tamborello
"And I am finally seeing
why I was the one worth leaving"
Advertisement:

The Postal Service was an American electronic band active from 2001 to 2005. Based in Los Angeles, its members were vocalist Ben Gibbard (of Death Cab for Cutie) and producer Jimmy Tamborello (a.k.a. Dntel), along with backup vocalist Jenny Lewis (then of Rilo Kiley). Singer Jen Wood contributed vocals as well. The band's name came from its means for production: Gibbard and Tamborello would mail CDs back and forth to each other, through none other than the American Postal Service.

The Postal Service's first and only album, Give Up, was released on February 19, 2003. It eventually became Sub Pop Records' biggest success since Nirvana's Bleach. Talks of a second album arose around 2007, but said album was never completed.

In the spring/summer of 2013, The Postal Service reunited for an extended world tour, which coincided with a 10th anniversary reissue of Give Up. Near the tour's end, it was announced through Gibbard's Twitter that The Postal Service would disband permanently. A documentary concert film from the tour, Everything Will Change, was released in November 2014.