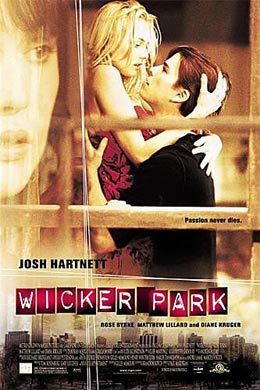 Wicker Park is a 2004 psychological thriller/romance film directed by Paul McGuigan starring Josh Hartnett, Diane Kruger, Rose Byrne and Matthew Lillard. The film is a remake of the 1996 French movie L'Appartement, which in turn is loosely based on Shakespeare's A Midsummer Night's Dream.

Hartnett plays Matthew - a successful photographer on the verge of getting engaged to his boss's daughter. He is back in his hometown of New York City for the evening when he overhears someone on a restaurant pay phone. It sounds suspiciously like Lisa (Kruger) the girl of his dreams from years ago who disappeared from his life without a trace. Matthew abruptly drops everything to try and find her, eventually tracking her down to an apartment...only to discover that the Lisa living there is a completely different person (Byrne). Or is she?