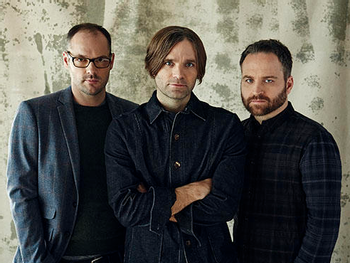 Death Cab for Cutie are an indie rock band from Bellingham, Washington, formed in 1997 as a solo project of Face of the Band Ben Gibbard, a twenty something science graduate who had previously been in other local bands such as Pinwheel and ¡All-Time Quarterback!. By 1998, Gibbard had recruited several band mates from his previous bands, most notably The Revolutionary Hydra, into a full fledged band. The name was taken from the The Bonzo Dog Band song of the same name, performed in The Beatles film Magical Mystery Tour.

Already well known in the Seattle area, Death Cab's breakout hit was their 2003 album Transatlanticism, which saw exposure in television shows such as The O.C. (in which it forms part of Seth Cohen's indie starter pack) and Six Feet Under. The attention prompted them to move from Barsuk Records, which had accommodated Gibbard and company for the past decade, to Atlantic Records. They continued to grow in popularity after their move to Atlantic, with Plans and Narrow Stairs becoming their most successful records to date, though reception towards the band has cooled somewhat since the release of the Synth-Pop-inflected Codes and Keys and the general decline in interest in Indie Rock acts in the latter half of The New '10s.

The other members continue to freelance elsewhere in their spare time, launching side projects wherever they see fit: Most notably, Gibbard teamed up with electronica musician Jimmy Tamborello (a.k.a. Dntel) to form The Postal Service, and former member Chris Walla is a well known record producer for other bands such as Tegan & Sara, The Decemberists, and The Thermals. Gibbard was also married

to actress and musician Zooey Deschanel, though they later separated