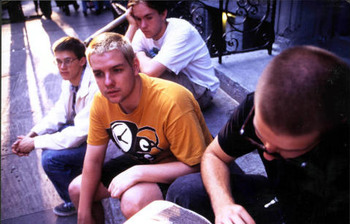 The only press photo of the band during their initial run.
Advertisement:

Christie Front Drive was an emo band formed in Denver, Colorado formed in 1993. The band consisted of Eric Richter on guitar and lead vocals, Jason Begin on guitar and some backing screamed vocals, Kerry McDonald on bass and occasional backing vocals and Ron Marschall on drums and was active until 1997 (with a couple reunion shows afterwards.) Along with the far more successful Sunny Day Real Estate, they were one of the first bands to mix the sound of emo, then a very small offshoot of punk music with a very nascent scene, with the then popular "college rock" style of Alternative Rock, thus producing the style commonly known today as Midwestern Emonote Although neither band was from the Midwest. The name is due to the style being later popularized by bands and scenes in the Midwest, centered around Illinois and Kansas City. Today this style is so copied it's easy to forget it was ever a fresh and unique thing and for this reason CFD are often overlooked even by fans of the modern day "emo revival" although they still retain a very dedicated cult following.

The band's most defining feature is perhaps Richter's very subdued and often muffled style of singing, because of this their lyrics are just as unintelligible as "cookie monster" death metal growls. To add more confusion, with the exception of a single song ("Bag") from a compilation, none of their lyrics were printed in the liner notes, thus resulting in the lyrics being Shrouded in Myth not only during the band's lifespan but until almost a decade later when Richter published some of them online. Remember that Tropes Are Not Bad, as many believe that Richter's vocal style and the unclear lyrics actually added to the depth and beauty of their music.

Like many emo bands of the era, they started out releasing only a series of 7-inch records, (a split with Jimmy Eat World in a musical example of Retroactive Recognition, another split with a now mostly forgotten band called Sineater, and a 7-inch of their own), in addition to a 6-song EP.note although released on 12-inch vinyl. These records are now all long out of print, although the songs from them were released on a compilation CD commonly called Anthology, which today is also out of print.note There have been a few re-releases of the vinyl though, some of which are still available. In 1995 they also released a split 10-inch with another emo band named Boy's Life, with their three songs on it often regarded as their best work. After the release of a few comp tracksnote including one where they covered the Mary Tyler Moore Show theme song on a compilation of punk covers of TV songs, the band played their last show in 1997, with the posthumous release of their only true full length, officially a self-titled album but commonly referred to as Stereo later. Eric Richter still had a pretty immense musical career afterwards, playing in various other bands with radically different sounds, ranging from the electronica project Antarctica, an upbeat Power Pop band known as The 101, and most recently the Post-Hardcore band Highness. He also played in a band called Golden City that had a somewhat similar sound to CFD but with a more cleaned up recording and intelligible vocals.

Despite a confusing pattern of out of print records and re-releases, the band's music is thankfully now available from most streaming services and digital music stores. If you're a fan of the emo revival, it is highly recommended.

While it doesn't stand out much in the song, the use of the word is a bit shocking since it's completely dissonant with the song's melodic and upbeat nature.