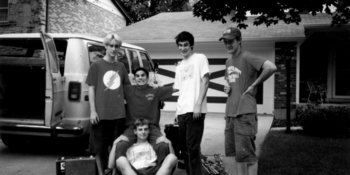 A rare press posed photo of the band, right before they left on tour.
Advertisement:

Cap'n Jazz were an Emo band formed in the Chicagoland region in the early 90s. Today they are largely known for kickstarting the musical careers of many of their members who went onto later bands such as American Football, but they have a pretty large and dedicated cult following of their own and their own massive influence.

The band had pretty humble beginnings, guitarist Victor Villareal met Tim Kinsella skateboarding together in a parking lot. After becoming friends they started jamming together in a garage, with Tim doing vocals to thrash metal covers and his brother Mike joining them on drums. They formed a band called Toejam that played a few shows at school gyms and VFW halls and then decided to take themselves more seriously. Bassist Sam Zurick joined in 1992, they changed their name to Cap'n Jazz and took on more of an punk influenced art rock sound. The band was finally rounded with the addition of Davey von Bohlen on rhythm guitar in 1994 and then went touring and developed a national following. After making a name for themselves in the then nascent underground emo scene, they released their first and only full length titled, *deep breath* Burritos, Inspiration Point, Fork Balloon Sports, Cards in the Spokes, Automatic Biographies, Kites, Kung Fu, Trophies, Banana Peels We've Slipped On and Egg Shells We've Tippy Toed Over, which eventually became commonly referred to as just Shmap'n Shmazz for convenience. Despite almost universal acclaim, the band didn't last long after this, with issues of drug abuse and other teenage drama dogging the members, the last straw being Villareal being hospitalized following a drug overdose after a show in Little Rock, Arkansas. This resulted in the band cancelling the rest of their tour, and eventually the band altogether. Schmap'n Shmazz went out of print not too long afterwards, although in 1998 Jade Tree Records released a CD compilation of almost the band's entire discography note One song, an early one on a compilation of Chicago bands titled "Naive" was not included, due to it having a completely different sound and style from the rest of their output. titled Analphabetapolothology. Around the Turn of the Millennium their popularity surged thanks to two big factors: 1-The growing popularity of the members post-Cap'n Jazz bands, most notably von Bohlen's The Promise Ring and Tim's own Joan of Arcnote not so much American Football, which at the time was just a footnote in the emo scene and broke up after only a single full length. Their popularity only surged decades later. and 2-The rise of Napster and other peer-to-peer file swapping services, allowing their music to be introduced to a whole new generation of high schoolers. Their out of print records started selling for massive prices on online auction sites and the band developed an obsessive underground cult following who never knew of them while they were together. Largely in response to this 4/5 of the original members (not Davey von Bohlen who was still busy with The Promise Ring), reunited in a new band simply called Owls, who released a single album to mixed reviews, and then also disbanded not too long afterwards. Owls did reunite in 2012 however, and the entire original lineup of Cap'n Jazz did reunite for reunion shows in 2010 and 2017.

The band's music is weird. Lyrics are often bordering on total nonsense and Tim Kinsella himself has admitted that he didn't really mean anything by many of them. They eschewed traditional song structures and verses and choruses entirely, often using unconventional meters and arrangements. Kinsella's vocals sit somewhere between traditional singing and shouting, and are frequently out of tune. And their large fanbase and influence is mostly attributable to be because of this, not in spite of it.

Though all of their original releases are well out of print, Analphabetapolothology is still widely available on both CD and vinyl and their music is available throughout all streaming services. If you want to see where all the members' later bands came from and check out such raw early emo, it's totally worth a listen.