Spoilers for SD Gundam World Sangoku Soketsuden will be unmarked! You have been warned! 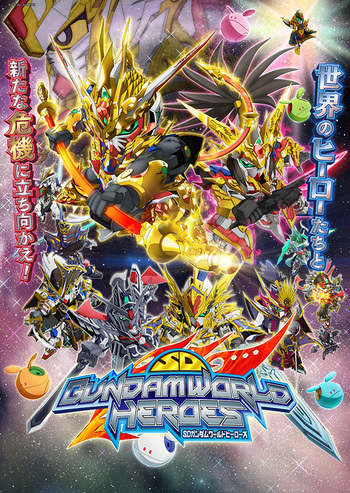 As it turns out, the country-eh, world of Sangoku Soketsuden (Also known as "Kingdom World") isn't the only one. There are many worlds out there on this planet, each with their own hero destined to protect them. One of these worlds, Neo World, gets an unexpected visitor in Wukong Impulse Gundam, as he crash-lands into the city via meteor, interrupting Zhao Yun 00 Gundam’s vacation there. While taken down by Neo World’s protector Sergeant Verde Buster Gundam, Wukong then travels to Kingdom World. Once Zhao Yun returns there to warn everyone, Liu Bei Unicorn Gundam and the rest of Dragon’s Watch deal with Wukong, with him seemingly losing his memories in the aftermath.

After all that, the Transmission Gate receives a message from a mysterious figure named Sanzang, who warns everyone of a Black Star who destroyed his planet and is coming for theirs, and they must collect the five OOPARTS, AKA Haros, and take them to the pyramid in Regina World in order to counteract it. Joined once again by both Blue Wing Corporation and Red Tiger, both Liu Bei Unicorn Gundam and Zhuge Liang Freedom Gundam set out across the globe to find the other Haros, with Wukong Impulse Gundam joining along the way. But how does Wukong fit into all of this, and what will he think of the various heroes across the various worlds?

The show started airing on April 8, 2021, and has a weekly schedule with new episodes every Thursday, rather than the monthly schedule Sangoku Soketsuden had. It also has a Carddass series, SD Gundam World Heroes Battle Mission Card

, which shadowdropped on June 26, 2021 after being teased to release in that same year some months prior.

Not to be confused with World Heroes, a Fighting Game series by ADK, or A World Of Heroes, a Play-by-Post roleplay hosted on TV Tropes.

Sima Yi Destiny Gundam copies Merlin Gundam's appearance before disposing of him to take his place in Knight World.

Example of:
Kill and Replace

Sima Yi Destiny Gundam copies Merlin Gundam's appearance before disposing of him to take his place in Knight World.