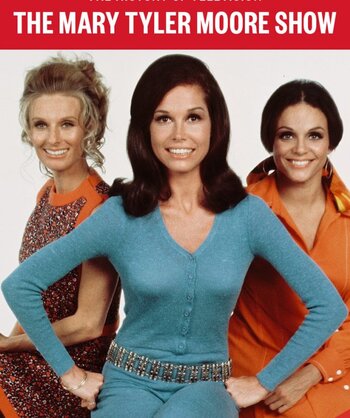 You're gonna make it after all!

note Left to right: Phyllis, Mary, and Rhoda.
"Sometimes I get concerned about being a career woman. I get to thinking my job is too important to me, and I tell myself that the people I work with are just the people I work with and not my family. And last night, I thought: what is a family, anyway? They're just people who make you feel less alone, and really loved. And that's what you've done for me. Thank you for being my family."
— Mary Richards, "The Last Show"
Advertisement:

A legendary sitcom created by James L. Brooks and Allan Burns and airing on CBS from 1970–77, which forever reshaped American television comedy; pretty much every Work Com that has followed in its wake bears its influence.

Mary Tyler Moore stars as Mary Richards, a 30-something single woman living in Minneapolis and working as associate producer for The Six O'Clock News on fictional TV station WJM.

The show was famous for the quality and depth of its writing, particularly in the attention and care given to the supporting characters in its Ensemble Cast, which included Lou Grant (Edward Asner), Murray Slaughter (Gavin MacLeod), Ted Baxter (Ted Knight), Rhoda Morgenstern (Valerie Harper), and Phyllis Lindstrom (Cloris Leachman). Even "Happy Homemaker" Sue Ann Nivens (Betty White), who could have been played as merely two-dimensional, was given some measure of depth.

This was also one of the first series to feature a single woman as the main character, and to focus on her career rather than her love life. As originally scripted, Mary was to have been recently divorced. This was considered too controversial in 1970 (plus, in a classic case of Viewers Are Morons, network brass was afraid the audience would think that Moore's Dick Van Dyke Show character, Laura Petrie, had gotten divorced from Rob), so her Backstory was changed to one of rebuilding her life following a broken engagement.

The Mary Tyler Moore Show was the first series produced by MTM Enterprises (founded by Moore and then-husband Grant Tinker), which would be responsible for several of the most popular and acclaimed shows of the '70s and '80s. In its seven-season run, the show won a whopping 29 Emmy Awards (a record that held until Frasier won its 30th in 2002) and a Peabody Award, and spun off three other series: Rhoda, Phyllis and Lou Grant. (The latter being one of the few instances where a comedy series spawned a drama.)

One of the many tropes it established was the recurring gag about Mary's disastrous dinner parties, similar to how Friends later built continuity around its Thanksgiving episodes, Roseanne had epic Halloweens, and Buffy the Vampire Slayer typically had ruinous birthdays. Also is the Trope Maker and Trope Codifier for High-Powered Career Woman in American media.

According to a book by J. Michael Straczynski, if a writer watches this and Fawlty Towers they will have had the best possible grounding in how to write comedy.

Ultimately MTM is best remembered for the depth and humanity of its characterizations, while never sacrificing the funny. Oh, and the hat-throwing scene in the intro.

MTM was known for highlighting its main cast and guest stars with video credits at the start of the closing titles.

MTM was known for highlighting its main cast and guest stars with video credits at the start of the closing titles.