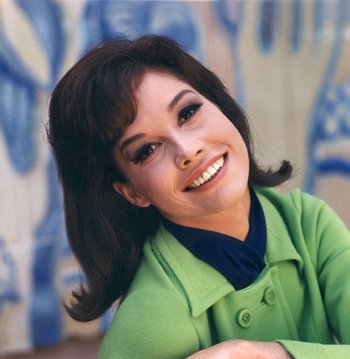 "Take chances, make mistakes. That's how you grow. Pain nourishes your courage. You have to fail in order to practice being brave."
Advertisement:

Mary Tyler Moore (December 29, 1936 – January 25, 2017) was an American actress, known for her roles in the television sitcoms The Dick Van Dyke Show (1961–66) as Laura Petrie, a former dancer turned homemaker, wife and mother; and The Mary Tyler Moore Show (1970–77) as Mary Richards, a single woman working as a local news producer in Minneapolis.

Due to her roles on both of those series, in which her characters often broke from stereotypical images of women and pushed the envelope on gender norms, Moore became a cultural icon and served as an inspiration for many younger actresses, professional women, and feminists.

Her film work includes Thoroughly Modern Millie (1967); Change of Habit (1969), Elvis Presley's last movie as an actor; and Ordinary People (1980), in which she played a role that was very different from the television characters she had portrayed, and for which she was nominated for an Academy Award for Best Actress.

Rivers Cuomo once had a friend who looked like her.

Film roles with pages on this wiki:

Television roles with pages on this wiki: