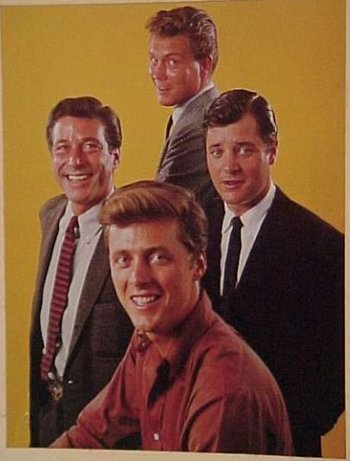 One of the most popular and memorable Detective Dramas of the late '50's, 77 Sunset Strip was a Warner Bros. Television production for ABC, set in Los Angeles, created by Roy Huggins (who refused screen credit) and produced by William T. Orr.

The series began life as a movie, "Girl On the Run", which aired as the first episode of the series. In the movie, private detective Stuart Bailey (Efrem Zimbalist Jr.) was out to save a girl from a vicious killer, played by Edd Byrnes. When it became a proper series, Byrnes was still involved, but as a new character, hipster parking attendant Gerald Lloyd Kookson, III, better-known to one and all as 'Kookie', and with his otherworldly lingo, certainly lived up to that moniker. Stu's partner was Jeff Spencer (Roger Smith), a former operative with Military Intelligence. Working the front desk was fetching French secretary Suzanne (Jacqueline Beer). Also around the office a lot was gambler Roscoe (Louis Quinn), who helped out a lot as a legman. Their police contact was Lt. Ray Gilmore (Byron Keith), a former military colleague of Jeff's.

Changes came about with the 1960 season. Warner Brothers was fond of shuffling around the actors in their series. Since most of their series' stars were under contract to them, if a show was canceled, they would either cast an actor from a canceled show in a new vehicle or add them to an existing show. In the case of 77 Sunset Strip, they acquired Richard Long and his character Rex Randolph from the Strip clone Bourbon Street Beat, which was set in New Orleans. Long lasted a season, after which Kookie got promoted (per Edd Byrnes's redone contract) from parking lot attendant/occasional legman to full-fledged detective and losing the jive talk in the process. This meant that a new attendant at Dino's (the fancy restaurant next door) was needed, and so J.R. Hale (Robert Logan) was brought in. Like Kookie, he had an odd way of talking, speaking in anagrams (for example, he mentioned to Stu that his style of service paid off in BTU's. Stu thought it was 'British thermal units', but to J.R., it stood for 'better tips, usually').

The team of Bailey and Spencer handled all sorts of cases, including murder, missing persons, major thefts and bodyguard duties, and they also traveled around the world on international intrigue cases. Most times, it was usually one of the detectives handling the case, but occasionally two or more of the regulars would team up for a mission.

The series was a reliable action show for four seasons, but Executive Meddling reared its ugly head midway through the fifth season (1962-63). Warner Brothers hired Jack Webb to run their television division. While he didn't make changes immediately, they were on the horizon. Webb and his production team, which included future Cannon star William Conrad, actually came aboard with the final episode of the season, and the bottom fell out for the final season. Webb gutted the series, firing the entire cast save for Zimbalist. Along with that, the familiar finger-snapping theme song was gone, replaced by a more noirish-sounding instrumental. Stu Bailey was now a single operative working out of the ornate Bradley Building, a long way from the fabled Strip, with a cute blonde temp secretary, and he no longer had a Friend on the Force, as every cop he dealt with was downright nasty towards him. The revamped series started out with an interesting, star-packed five-part episode aptly titled "5", which sent Stu on a mission that started out in New York City and took him all around the world. The subsequent episodes didn't have the charm of the earlier episodes, and viewers abandoned the series in droves. 77 Sunset Strip was canceled in January of 1964. Jack Webb was subsequently fired from his post and replaced briefly by William Conrad, who in turn would be replaced as head of Warner Brothers Television by William T. Orr, the guy Webb replaced.