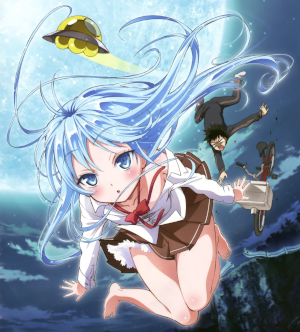 The boy is a generic Audience Surrogate, The Everyman, maybe an Ordinary High-School Student, and he is the Point of View character, and Hero Protagonist.

The girl is a more exotic character and the center of all advertising material. Maybe she's a Magical Girlfriend, Cute Monster Girl, or from another world entirely, but either way, she's definitely not as ordinary as the boy. Her name is probably in the title, and her presence starts the plot and keeps moving it. Through this, she's the face of the entire work and provides a reason for people to watch the show.

Naturally, this can be a source of confusion if people assume the poster girl is the protagonist. Tends to happen most in Supporting Harem stories. Compare to First-Person Peripheral Narrator, where the first person narrator is not the protagonist, and to Manic Pixie Dream Girl, where the "Poster Girl"'s in-universe role is to shake up the male protagonist's life. A result of Men Are Generic, Women Are Special. See also Non P.O.V. Protagonist.