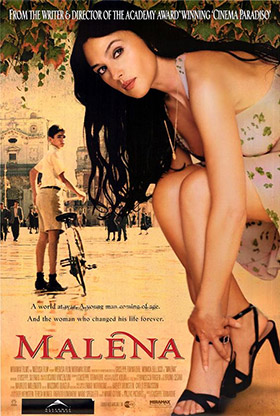 What is the most obvious course of action if you are a 12-year-old Sicilian boy when the fascist government is taking over and the Allies are bombing your village? Stalk the gorgeous madonna who just recently moved into town. That's basically the entire plot of Malèna, a 2000 Italian romantic drama written and directed by Giuseppe Tornatore (Cinema Paradiso) and starring Monica Bellucci.

Where you live in the world determines which version you can (legally) view of this film. In most of Europe the film features nudity and sexual content involving the boy, but the version seen in North America, the UK and other territories removes enough of this footage that some of the tropes that follow no longer apply.