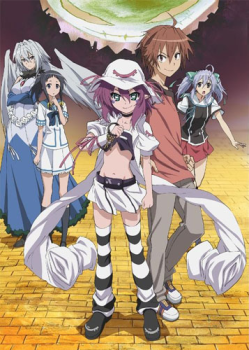 Yumeji Fujiwara has a strange ability. He can see the aura of peoples' dreams. Around himself, there is a black aura. A nightmare. Though Yumeji lives a comfortable life with his childhood friend Isana and his school's Literature Club, he's had a recurring dream of cats. Multiple cats attacking him, trying to claim his body so they can cross over from the nightmare to our world.
Advertisement:

There is another party involved. A girl in a strange set of clothes. She falls on top of Yumeji one day and, after getting her hat back, finds her way into his world. Her name is Merry Nightmare, a dream eater. She has no memories of from where or who she was and seeks to return to the world of dreams.

Dream Eater Merry (or Yumekui Merry in Japanese) is a manga by Yoshitake Ushiki, a Manga Time Kirara Forward manga lasting from 2008 to 2020 with 24 volumes. It was adapted into an anime in the winter of 2011 by JC Staff. Touhou Project fans may recognize the author from his doujinshi work Advent Cirno, and the people handling the music as IOSYS.

Tropes in Dream Eater Merry include:

Tropes in Kagefumi Merry include: