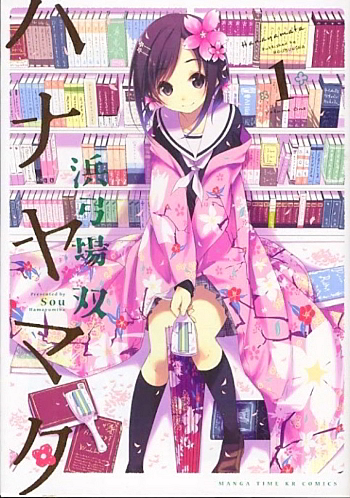 Naru Sekiya, on the cover of volume 1.
"How about you dance along with me?"
Advertisement:

Hanayamata (ハナヤマタ) is a Slice of Life series written and drawn by Sou Hamayumiba, and serialized in Manga Time Kirara Forward from June 2011 to February 2018. It received a 12-episode adaptation by Madhouse that aired during the Summer 2014 Anime season. A Playstation Vita game Hanayamata: Yosakoi Live was developed by Bandai-Namco and released in November 2014.

Naru Sekiya is feeling listless. She's always felt too ordinary and boring, especially when compared to her best friend Yaya Sasame, but due to her meekness she's never been able to reach out to other people. She hoped that things would change once she entered middle school, but now she's already in her second year, and her situation remains unchanged. Will she be able to shine brightly like the heroines of the fairy tales she still loves reading about? She's not really sure any more.

Then, one night as she's walking home from yet another mundane day at school, she encounters a beautiful fairy, dancing amidst a cloud of cherry blossoms and under the light of the evening moon. The fairy, surprised by Naru's attention, bolts, but Naru chases after her, a part of her desperate to join the fairy in going to whichever realm it was going, which was likely much more colorful than the world Naru was currently living in. On impulse she asks the fairy to take her as well.

This piques the interest of the fairy, but as soon as Naru is to find out, the "more colorful world" that she was promised wasn't exactly what she was expecting.

The anime is licensed by Sentai Filmworks for home video release (as with many Manga Time Kirara titles), and it is receiving an English dub as well.