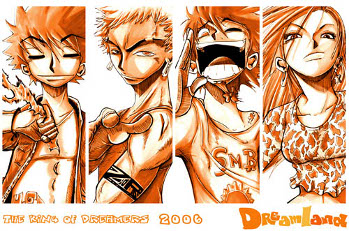 From left to right: Terrence, Savane, Sabba and Ève. They form the Lucky Star Team!
Advertisement:

This is not the trope Dreamland, although it sure qualifies for it.

Created by Reno Lemaire, this French comic written, drawn and edited as a Manga turns around the life of the lazy Ordinary High-School Student Terrence Meyer, who is afraid of fire since his mother died in one. One night, during a nightmare, he overcomes his fear and "awakens" inside his own dream. Soon after, an old man with a massive cross-shaped pendant and a pipe shows up before Terrence and explains him he is currently in Dreamland. For people who become conscious of this world by overcoming their phobia, Dreamland literally becomes a second life: they are called Travelers and are granted a special power. When they wake up, they disappear from Dreamland and return to their powerless self in Real Life; and if they die in Dreamland they merely become unconscious dreamers once more.

Terrence receives the power of Playing with Fire although he's not exactly good at using it. First Terrence wanders in Dreamland with the vague idea of "protecting the dreams of people". Then he runs into a romani Boisterous Bruiser named Savane who has the unique ability to summon fish, and a weed-addicted, cowardly art student named Sabba who wields a magical brush but for some reason has no power of his own. The group is soon joined by Ève, an insufferable fashion victim who happens to be the best friend of Lydia, Terrence's real life Love Interest. The group (well, mostly Terrence) ends up starting to search for Edenia, a mythical kingdom in Dreamland that is said to host the souls of the dead. Problem: nobody has ever found it, nor even proven its existence.

That's the "Dreamland" part, but the series also makes us follow Terrence's Real Life in the French city of Montpellier and its more ordinary — but no less difficult — challenges. As the series progresses, other groups and plots are developed as we discover the vast and dangerous universe of Dreamland, and Terrence's two lives overlap more and more.

The series has been running since 2006 and is still going with 20 volumes out. Along with Sentai School, it is usually considered one of the precursors of the "French manga" trend that would become more noticeable in the following decade with titles like VanRah's Stray Dog or Tony Valente's Radiant. The series has a limited, faithful fandom in France but is completely unknown outside of it. It doesn't help that the humor and the real life depicted are all very typically French, and thus far from the usual tone of Japanese comedies. No Moe or harem antics here: Terrence's teenage life involves failed exams, partying, alcohol, and yes, losing his virginity.

An animated adaptation by French studios Ellipse Animation and Chouette Compagnie has been announced in 2022.

The series gives us examples of: