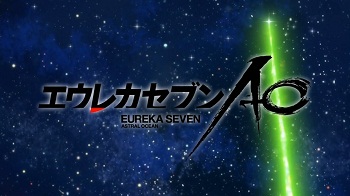 Eureka Seven AO is an anime and manga series that is a Sequel to Eureka Seven. The animated series began airing in April 2012. The manga began in January 2012.

The series follows a boy named Ao living on the islands of Okinawa, which has recently declared independence from Japan. Ao is the orphaned son of a foreigner who moved to the island, which causes him to be subjected to less than Fantastic Racism. Despite this he's still close friends with Naru, a girl who comes from an influential family on the island.

Earth is plagued by attacks from the Secrets (called G-monsters by the Okinawans), which seem to be attracted to Scub Coral (a strange material that appears out of nowhere). When one of these beasts attacks the Okinawan island of Iwato Jima, not only does Ao find himself Falling into the Cockpit, he also learns of his strange lineage related to the main characters of the previous series. Saving the island also pulls him into the middle of many political issues, including Okinawa's struggle for independence.

, one week behind the then-current episode in Japan. The series is also being dubbed into English.

for the series was released in September 2012 by Bandai Namco Entertainment. It includes a bonus episode (taking place between episodes eight and nine) and also includes

This series is also immensely notorious for originally coming to an end on a completely abrupt note after two seasons. Fans were far from pleased and scalded the developers and writers of the series, branding that lapse in judgement a transgression similar to the first ending provided from another popular mecha anime that preceded the Eureka Seven franchise, Neon Genesis Evangelionnote (notorious for ending on two surreal and bizarre psychologically-driven episodes in its initial run that did not bring the series to a true close, which led to the coining of the trope "Gainax Ending"). Fortunately, just like the Evangelion series received its proper and intended conclusion with the eventual release of End Of Evangelion, Bones took into account the negative backlash. When the time was right to regather the cast and break away from other projects, they produced and eventually released a series of five minisodes from January 10 to March 2, 2017 that all compile into Episode FINAL: "Lord Don't Slow Me Down", or One More Time, a meticulously written patch-up episode that tacks on a proper ending to the series, giving it the caboose fans wanted.

There are two Spin-Off manga. The first is entitled Eureka Seven AO ~Save A Prayer~. It follows Yuna Marta, a girl who accidentally qualifies as a giant mecha pilot when she mistakes a military organization for a theater troupe. Characters from the anime appear as part of the supporting cast. The second is a comedic Yonkoma series entitled Eureka Seven nAnO.

All character tropes should go to the Eureka Seven AO character page.