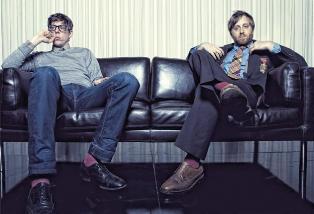 "Asking the Black Keys 'Why do you play the blues so good?' would be like asking a cloud 'Why are you fluffy so good?' How the hell is someone supposed to answer that? It's like a Zen koan."
—Brian J. Bowe, Creem Online

The Black Keys are a Grammy-winning Blues Rock band from Akron, Ohio, formed in 2001. While some of their albums have featured session musicians, the core band consists of only two members - Dan Auerbach (guitar, vocals) and Patrick Carney (drums).

Early in the band's career, much media attention was placed on their raw, minimalistic style (the result of a recording technique euphemistically referred to as "medium-fidelity", described by the band as "equal parts broke-ass shit to equal parts hot-ass shit.") Since Attack and Release, however, their sound has been a bit more expansive, adding more sonic detail while keeping the band's Blues Rock sound front and center. The music video for "Howlin' for You" is so troperrific that it now has its own page.

Tighten up on your tropes, you're running wild: