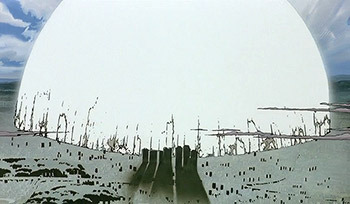 Here we go again...
"The movie begins with Tokyo exploding — which, for anime, is the cliche equivalent of It Was a Dark and Stormy Night."
— Noah "The Spoony One" Antwiler, The Spoony Experiment on AKIRA

A catastrophic event destroys a major city, which then gets rebuilt — and then the cycle repeats itself with monotonous regularity. In anime and other Eastern works, this often happens as a direct effect of Tokyo Is the Center of the Universe. In American / Western works, this trope almost never happens to the Big Applesauce (the nearest equivalent trope), and if it does, it rarely limits itself to that one location.

History proves this trope true to a depressing degree. Traditional Japanese construction techniques rely almost entirely on wood, bamboo, and paper; the country's history of typhoons and earthquakes tended to discourage people from building with materials they didn't want to have land on their heads. Combined with Edo/Tokyo's enormous population density, this resulted in the entire city essentially burning down to the foundations every couple of generations. The last great firestorms — the result of incendiary-bombing during World War II — helped usher in modern construction techniques (which made Tokyo much more resistant to this).

One more note for this trope: no matter how the destruction happens, it will rarely happen thanks to a nuclear bomb.