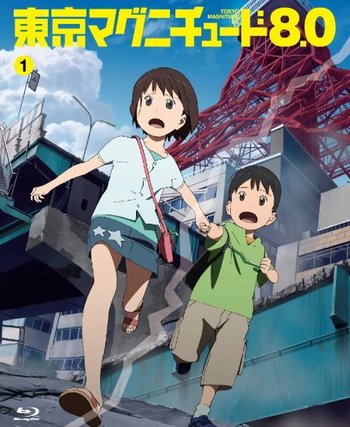 One: There is an estimated 70% chance that an earthquake of magnitude 7.0 or higher will hit Tokyo, Japan within the next three decades.

Two: Mirai Onozawa is your typical rebellious thirteen-year-old—bored with school, frustrated with her seemingly-distant parents, and annoyed by her cheerful younger brother Yuuki. Her single point of solace at home is her cell phone, with which she texts her friends and organizes her thoughts.

On the first day of summer break in 2012, Mirai takes Yuuki to a robotics exhibition on the artificial island of Odaiba in Tokyo Bay, upon the insistence of her mother. Feeling humiliated and alienated by this and a couple of encounters during the trip, she quietly wishes to herself that the world would break.

The next moment, the world does. An earthquake of the eponymous magnitude 8.0 erupts from northern Tokyo Bay, causing buildings to come crashing down, iconic landmarks to crumble, and fires to erupt in the city center. In the chaos surrounding the initial tremor, Mirai and Yuuki meet Mari, a motorcycle delivery woman and single mother. Together, the three of them set out on the long journey to the Onozawa home in western Tokyo.

Tokyo Magnitude 8.0 started running in July 2009 with 11 episodes, with direction by Masaki Tachibana (Moribito: Guardian of the Spirit) and music from Kou Ootani (Shadow of the Colossus, Haibane Renmei). It succeeded Eden of the East in Fuji Television's noitaminA late-night timeslot.

Beware: Most spoilers present in this page will ruin your experience of the series if you haven't seen it yet.

Mirai's toes accidentally get stepped on.

Mirai's toes accidentally get stepped on.